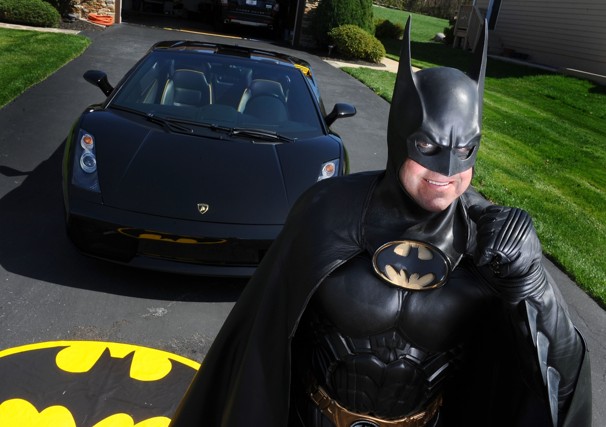 Every once in a while you come across a story that provides enduring faith in fellow mankind.  I read the following article (extracted) from the Washington Post posted online March 28, 2012.  In a world often times so consumed with consuming oneself, here is an example of someone who has taken all that has been given to him and turned it in to something for a bunch of kids struggling with cancer and truly making their lives better.  Way to go Batman!

Police pulled a man over on Route 29 in Silver Spring last weekbecause of a problem with his plates. This would not ordinarily make international news, but the car was a black Lamborghini, the license plate was the Batman symbol, and the driver was Batman, dressed head-to-toe in full superhero regalia.

It didn’t take long before images of the Dark Knight’s encounter with law enforcement began turning up in Facebook news feeds, on CNN and the London tabloids. The episode even made it into Jimmy Fallon’s monologue on NBC earlier this week.

Jokers emerged instantaneously too. “Let him do his job,” one commenter urged on the Post Web site. “Batman has expensive taste,” noted another. Meanwhile, questions about Batman’s identity mounted: “Did they make him take off his mask?” someone asked.

No, they did not. Even Montgomery County police honor a superhero code of conduct, just like the Howard County officers who once helped him with a flat bat tire. Batman told officers his real name was not Bruce Wayne but Lenny B. Robinson, and that his real tags were in the car. (He was not ticketed then, but has been before for a heavy bat foot.)

The Caped Crusader is a businessman from Baltimore County who visits sick children in hospitals, handing out Batman paraphernalia to up-and-coming superheros who first need to beat cancer and other wretched diseases.

I actually know Batman. His parents are dear friends of my wife’s family, and I see him at holiday dinners where my 4-year-old son believes he is the real-life Bruce Wayne. “Daddy, he’s Batman, too,” my son will whisper to me. Though Batman has long been aware that I’m a journalist, he has never suggested I write about him. He does not crave publicity. Like his comic book namesake, he doesn’t seek credit for what he does.

But in light of him going viral — “Gotham City is on the verge of chaos,” Anderson Cooper informed CNN viewers — I asked him whether I could unveil the man behind the mask. He acquiesced but suggested I do so by accompanying him to the cancer ward at Children’s National Medical Center in Northwest Washington for a superhero party thrown by theHope for Henry organization.

On Monday, he pulled up in his black Lambo with yellow Batman symbols on the doors, the floor mats, the headrests — pretty much everywhere — and he was dressed in his heavy leather and neoprene uniform that he bought from a professional costume maker.

He carried two large bags of Batman books, rubber Batman symbol bracelets and various other toys up to the front desk, where the check-in attendant asked him his name.

Camera phones were snapping. A man in line said, “That’s the guy whogot pulled over.” Someone asked where Robin was, and Batman replied, “Home studying for the SATs.”

It took Batman approximately 20 minutes to reach the elevators. He stopped to hand out Batman toys to every child he saw, picking them up for pictures, asking them how they were feeling. LaTon Dicks snapped a photo of Batman standing behind her son DeLeon in his wheelchair. She’d recognized the Batmobile on her way in to the hospital. Like everyone else, she’d seen a TV report on him being stopped by the police and protested, “You can’t pull over Batman.” 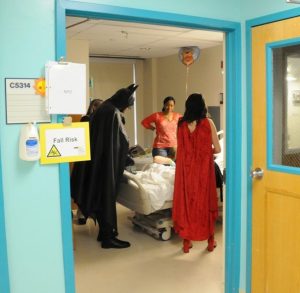 When Batman finally reached the elevator for the slow ride up to the cancer ward, I could see his face already sweating behind the mask. He told me he loses 5 to 6 pounds in water weight when he wears the superhero uniform. He paid $5,000 for it. He spends $25,000 a year of his own money on Batman toys and memorabilia. He signs every book, hat, T-shirt and backpack he hands out — Batman.

Batman is 48. He is a self-made success and has the bank account to prove it. He recently sold, for a pile of cash, a commercial cleaning business that he started as a teenager. He became interested in Batman through his son Brandon, who was obsessed with the caped crusader when he was little. “I used to call him Batman,” he told me. “His obsession became my obsession.”

Batman began visiting Baltimore area hospitals in 2001, sometimes with his now teenage son Brandon playing Robin. Once other hospitals and charities heard about his car and his cape, Batman was put on superhero speed dial for children’s causes around the region. He visits sick kids at least couple times a month, sometimes more often. He visits schools, too, to talk about bullying. He does not do birthday parties.

His superhero work is limited to doing good deeds, part of a maturation process in his own life. In his earlier years, he acknowledges that he sometimes displayed an unsuperhero-like temper and got into occasional trouble with the law for fights and other confrontations. Putting on the Batman uniform changes and steadies him.

“Eventually, it sinks in and you become him,” Batman told me. “It feels like I have a responsibility that’s beyond a normal person. And that responsibility is to be there for the kids, to be strong for them, and to make them smile as much as I can.” He understands that might sound corny, but he doesn’t care.

Batman stepped off the elevator on the fourth floor of Children’s. Spider-Man and Wonder Woman were there too — both professional actors from talent agencies, on the clock. He picked up a little boy and said, “I have a present for you.” He shook hands with a father and handed him a yellow rubber Batman bracelet, saying, “This will bring you good luck.” The father said, “We need good luck.”

The parents always say that.

Batman asked each child his or her name. He lifted up almost every child. Many were weak, their hair thin from chemo. He always told them, “I have a present for you.” When a little girl ran away, perhaps a bit scared, Batman said, “That’s the story of Batman’s love life.” (He is divorced.)

Batman overheard a mother tell someone that her toddler was going home the next day, and holding the toddler, and hugging him gently, Batman said, “I’m really glad you are feeling better.”

Stephanie Broadhead of California, Md., was leaning against the wall while her 10-year-old daughter Claire was having her face drawn by an artist. Claire has leukemia. Batman stopped by to marvel at the picture and hand Claire some gifts. “This makes a very hard thing to deal with a little easier,” Claire’s mom said.

Superhero visits to hospitals let kids be kids in a scary, adult place, but the activities are indeed therapeutic, too, the chief doctor on the cancer floor told me.

“These visits provide an immediate boost for these kids,”said Jeffrey Dome, the oncology division chief at Children’s. “Some of these children have to stay for weeks or months at a time. That wears down the children and it wears down the family. You have to keep up morale. A visit from a superhero is sort of like a fantasy in the middle of all this hard-core therapy.”

As Batman wandered around from child to child, I asked him, “Isn’t this hard?”

The party began winding down. Spider-Man changed out of his costume. Wonder Woman changed out of hers. They said goodbye to Batman, still working the floor, as he posed for a photo with a patient’s father. The father thanked Batman and said, “I saw you on the news — Route 29.”

“I think everyone saw me on Route 29,” Batman acknowledged. He asked the nurses at the front desk whether there were any children who couldn’t come out of their rooms to see him.

Assured that there weren’t, Batman headed back down to his Batmobile, followed by the mother of a baby girl with cancer and her healthy 4-year-old son, whose only goal in life at that moment was to see the Batmobile. When the boy saw the car, I thought his eyeballs were going to separate from his body. (Batman is actually in the process of having a just-like-the-movies Batmobile built for $250,000, but it’s not ready yet.)

“I want to go help him fight the bad guys,” he said.

His mom said, “You need to go help your sister fight cancer.”