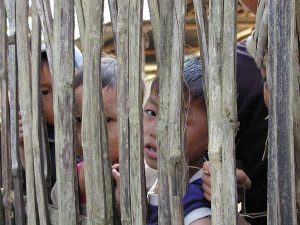 Burma is a country in Southeast Asia. It’s rogue government identifies itself as Myanmar, but many countries such as ours have chosen not to identify as such due to a perceived illegitimacy. Burma is and remains towards the top of the list when it comes to Human Rights Violations. Forced labor, human trafficking, and child labor are common. The military is also notorious for rampant use of sexual violence as an instrument of control, including allegations of systematic rapes and taking of sex slaves as porters for the military. A strong women’s pro-democracy movement has formed in exile, largely along the Thai border and in Chiang Mai. There is a growing international movement to defend womens’ human rights issues. Nevertheless, refugees flee their homeland in hopes of a better life and saving their own. 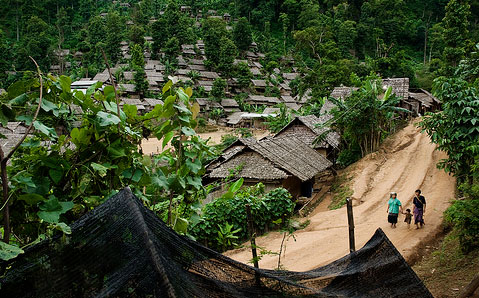 Our part involved outfitting an apartment with everything they would need including furniture, clothing, food, cleaning supplies, toys, etc.. My wife spearheaded the collection and put out the word to the neighborhood and friends. In only a mater of days we were able to stuff a 17 ft. U haul truck with just about everything you would need to operate comfortably in a three bedroom apartment.

With the help of more friends and my own kids, we set up the apartment in anticipation of their arrival to Austin. Food was placed in the fridge, towels hung, beds made and toys arranged for their arrival. In only 24 hours Peggy and I would meet a family of five at the airport. Mom, Dad and three children had traveled half way across the world. They knew not a lick of english and had lived without electricity and indoor plumbing. In only hours they would be driven up North Lamar to a world completely foreign as you can imagine.

“Welcome to Austin”, I said. We were introduced with the help of an interpreter. Four children huddled behind their parents, peering out around a leg to make brief eye contact. Three young boys and one of the sweetest little girls you can imagine. I wondered how nervous and scared they might be. It was time to gather their only belongings and leave for the apartment. Because my car would only hold six passengers, it was decided to separate the family. The father would ride with a volunteer and Peggy and I would take mom and the kids. It was an awkward and even excruciating moment as the father was faced with having his wife and kids drive off in a strange country with his family. But 30 minutes everyone was reunited at the apartment. Together this family from Burma, who lived without running water, electricity nor any of the modern conveniences we have come to view as commonplace, stepped into a world of switches, knobs, flashing lights, cooling systems and stove tops.

For the next few hours we gave our new friends a crash course on using everything from a light switch to the ice maker. We explained how to operate the thermostat and turn a washing machine on. I was humbled and awestruck at the same time. I kept reflecting on how complicated our lives really are and how absolutely contrived our world must have seemed to them at the same time.

I left that evening feeling good about being a part of helping a family out of persecution and poverty. I also felt worried about the complexity of the world they had arrived in and how they would adapt. At that point they hadn’t even turned on the flat screen! My guess is they will adapt fine, and perhaps they will retain some of the simplicity their life afforded them that ours desperately needs. Perhaps they bring as much to our world as we bring to them. To think otherwise would be awfully egocentric and missing out on an important lesson for myslelf.